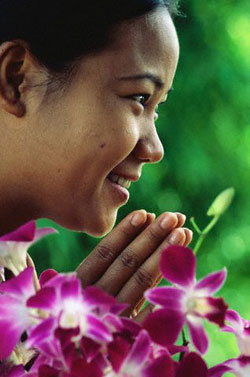 The Thai are a proud nation of people with a long history and well-established, complex hierarchical structure of status. Starting with the Royal family and percolating down, everyone in Thailand knows and respects their place in society. A polite Thai – which is most of them – will usually immediately identify whether another is of higher status than them (usually deemed by age or wealth) and initiate the ‘wai’ – a graceful bringing together of the hands to the chest or beneath the nose.

Contrary to popular impression, Thais are quite conservative and expect visitors to dress appropriately in formal public places. They are also discreet about showing affection, especially in public.

While Westerners tend to pick up subtitles in tone of voice to indicate someone’s mood, Thais read more into your body language and approach. Emphasis is usually placed on passiveness and although they are used to foreigners being abrupt, it pays to smile constantly and go gently. Eye contact is a common and important method of placing strangers at ease and there is good reason why Thailand is known as ‘the land of smiles’. The Thai are incredibly patient and forgiving and are happy to accept things as they are. The best you can do as a foreigner is to offer a soft laugh in testing situations, and say ‘mai pen rai’ (never mind) – a frequently used excuse. 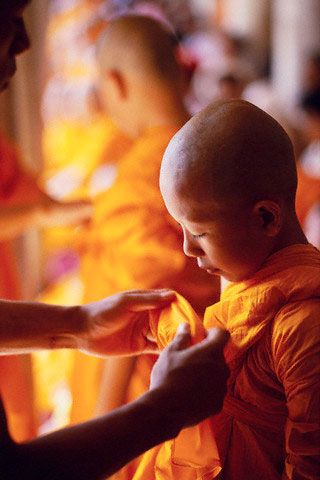 The Culture of Thailand is heavily influenced by Buddhism. Around 95% of the Thai population are Buddhist. About 4% of the population, mainly living in the south of Thailand, are Muslim. The remaining 1% are Confucians, Taoists, Christians, and Hindus. You can learn more about Buddhism at a number of monasteries and meditation centers that offer courses and events in English, some even with free room and board. Bangkok also has a number of mosques, churches, hindu temples and shrines.

Thais use their first names and usually do not use their family names. In line with this local custom, teachers are addressed by the first names, i.e. the head of school, Mr. Paul Johnson, is addressed as Mr. Paul and Primary school principal Ms. June van den Bos is called Ms. June. It may seem a little strange at first but you will quickly get used to it. Mr., Mrs. or Ms. means “khun” in Thai and outside of school you’ll be called “khun” followed by your first name.

Although you can mostly get by with English around Bangkok, you will soon encounter situations where you need to know at least some Thai phrases. Because English is the language that you will speak all day at school with your colleagues, students and their parents, you may have to go out of your way to learn some Thai. You could take conversational Thai language lessons, either by yourself or as a small group. A few teachers are rather fluent by immersing themselves in Thai culture, moving out of the expat-dominated areas to live among locals, and watching Thai TV shows and movies.

Thai people love when you speak even a little of their language and will be quick to praise you. You will see that any effort on your behalf to speak Thai language and understand local customs and traditions is very much appreciated.

Thailand for Visitors has a good explanation of the Thai language with other useful links for learning Thai phrases.