Some facts about Bangkok 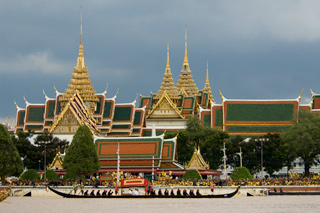 Bangkok is a vibrant and cosmopolitan city with a population of over 10 million people, which makes it the largest city in Thailand. Bangkok is located in the central part of the country on the low flat plain of the Chao Praya river, the “River of Kings”, which extends to the Gulf of Thailand.

In Thai language the capital city is called Krung Thep Maha Nakhon or in short Krung Thep which translates “The City of Angels”.

Bangkok has been undergoing rapid urbanization and industrialization since
1960. The increasing population is due in part to the development of infrastructure and a growing economy that resulted in expansion into the surrounding areas and the migration of people to the city from all parts of the country. 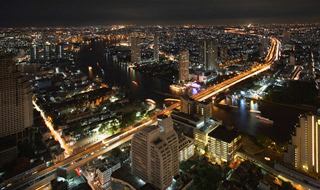 Thailand’s climate is tropical, high both in temperature and humidity, and dominated by monsoons. April and May are the hottest months of the year, when even the locals are moved to complain about the heat. June sees the beginning of the South West Monsoon, and brings with it the rainy season, which continues intermittently until the end of October.

From November to the end of February the climate is much less trying with a cooling North East breeze and a reduction in the humidity level. This is also the main tourist season, and the best time to visit Thailand.

For the Western visitor there is no such thing as “cool”. Just cooler than “hot” and “drier than humid”, so light cotton clothing is the order of the day. Do remember that the tropical sun can be quite fierce so a hat a good sun screen are useful.